In these trou­bled times, mem­o­ry reels of my mother’s father keep rolling through my mind. He lived through the 1918 influen­za pan­dem­ic in Keo­kee, Vir­ginia, a coal-min­ing town where kids call their grand­fa­ther Papaw.

When I was lit­tle, Papaw and Nan­ny lived near our house on route 60 just west of York­town. One of my ear­li­est mem­o­ries is danc­ing with him in their liv­ing room to songs like But­tons and Bows and Swing­ing on a Star played on a crank-up Vic­tro­la. He picked me up and waltzed me around the room with soft laugh­ter that came from deep in his chest.

After we moved away to White Hall and I out­grew my sour atti­tude, Papaw and Nan­ny came to vis­it us. I worked on the Maupin farm that sum­mer. On a hot as hell day we baled hay in a field beside the par­son­age. When I came home at quit­ting time, Papaw met me at the door. “I saw you out there, boy,” he said, smil­ing. “For a long time I thought you wouldn’t amount to any­thing, but it looks like I was wrong.” That moment meant a lot to me then. It still does.

When he retired from his job as a car­pen­ter for the Navy’s Cheatham Annex, he and Nan­ny moved to St. Cloud, Flori­da. On UVA’s spring break, I rolled down to Day­tona Beach for the annu­al col­lege stu­dent wild times. Mid­week, I took a break from the crazi­ness and drove over to St. Cloud.

That night after sup­per Papaw sat in a rock­ing chair on the porch, smok­ing his pipe, and we talked eas­i­ly for a while. Then he fell silent. I felt some­thing heavy com­ing, so I kept quiet.

He cleared his throat. “Your mom­ma told me how good you’re doing in school,” he said. “She says it’s because you’re smart, but I sus­pect it’s got more to do with hard work.” He paused. Crick­ets sang in the bermu­da grass. A car coast­ed down the street. He looked over at me. “You try real hard now, but that hasn’t always been your nature.”

I looked away, uncom­fort­able about the times I’d dis­ap­point­ed him.

“I want you to promise me you won’t slide back,” he said. “Promise me you’ll always try hard.”

I kept my head down, not sure I would keep such a promise. He wait­ed me out. “I’ll try,” I final­ly said in a small voice.

He stared at me for a few moments, then resumed smok­ing and rock­ing. “I’m proud of you, boy,” he said gently. 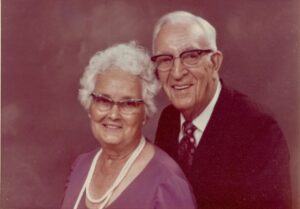 I didn’t know it then, but some­time before we had that talk the doc­tors found can­cer in his knee. They want­ed to ampu­tate his leg. He wouldn’t agree to it. Over the next two years the can­cer metastasized.

He had only a few months left when my broth­er and I drove down to St. Cloud. Papaw didn’t know we were com­ing. He was sit­ting in the liv­ing room talk­ing to my uncle when we walked in. He grabbed my arm, pulled me down to him, and pressed his cheek against mine. “I thought I’d nev­er see you again,” he choked out. It was the only time I ever saw him cry.

He took his last breath in bed at home with Mom by his side. Nan­ny had lost her will to live and had been hos­pi­tal­ized short­ly before his death. She died a month later.

Research­ing my mother’s fam­i­ly tree decades after they passed away, I came across doc­u­men­ta­tion of a mar­riage in Keo­kee in 1917 between a man with Papaw’s name and Una Mae Col­lier. Nanny’s name was Martha Alice Huff, so I thought there had to be some mis­take, but the records called out Papaw’s cor­rect birth date and occu­pa­tion as a coal min­er. I dug deep­er and found a birth reg­istry that said this cou­ple had a son, Ralph, in 1918. The details about the father fit Papaw.

These records sur­prised me, but it was the death cer­tifi­cates that took my breath away. The infant son died ear­ly in 1918. Una Mae per­ished in Octo­ber of that year dur­ing the sec­ond wave of the influen­za pan­dem­ic. She was 18 years old. Papaw lost a sis­ter two weeks lat­er. The fol­low­ing year his moth­er fell prey to the third wave of the virus.

Papaw’s father sur­vived the pan­dem­ic and strug­gled on for a decade, but he couldn’t live with the grief. The coroner’s report list­ed his cause of death as a self-inflict­ed gun­shot wound to the head.

None of this made sense to me. I couldn’t rec­on­cile these dev­as­tat­ing tragedies with Papaw’s steady opti­mism. The man I had known and loved was con­tent, serene, happy.

Mom was in her eight­ies when I asked her about the records I had found. “Is any of this true?”

“It’s all true. Dad­dy nev­er spoke of it, but peo­ple in Keo­kee told me about those days. They said Una Mae was his child­hood sweet­heart. She and Dad­dy had only been mar­ried a lit­tle over a year when she and the baby died.” She shook her head sad­ly. “Dad­dy was real close to his mom­ma, too.”

I asked about Papaw’s father. “I was a lit­tle girl when he killed him­self. I remem­ber Dad­dy cry­ing about it and say­ing over and over again, ‘He final­ly went and did it.’”

“How did Papaw live with so much loss?”

“I don’t know, but he kept going some­how.” She gazed past me into the dis­tance. “Dad­dy was real strong.”

I wait­ed a respect­ful time and then said, “Tell me about Jack.”

Mom said her broth­er came down with a rag­ing fever. The doc­tor told them there was lit­tle hope of sur­vival and quar­an­tined the fam­i­ly in the house. Papaw nev­er left Jack’s bed­side, wip­ing him down with ice and squeez­ing cold water from a cloth into his mouth, but the fever wouldn’t break. He died at dawn, a few days after his eleventh birthday.

“You remind me of Jack some­times,” Mom said in an off-hand­ed way. “You resem­ble him some, and he was good in school, like you.”

That casu­al com­ment sank in slowly.

When our first grand­child was born, her par­ents asked me what I want­ed her to call me. We live in Cal­i­for­nia, about as far away geo­graph­i­cal­ly and cul­tur­al­ly from Appalachia as you can get. Some­times peo­ple look at me fun­ny when one of my grand­kids calls me Papaw, but it always gives me a warm feel­ing inside.

Dur­ing this pan­dem­ic, I’m some­times fear­ful about the future and anx­ious for my fam­i­ly. I can only speak to my chil­dren and grand­kids from a dis­tance or tech­no­log­i­cal­ly, and the CDC says hug­ging them might kill me. My clos­est social con­tacts are Drs. Fau­ci and Birx. The high point of the day is walk­ing the dogs while decked out in haz­mat mask and gloves. Ruth­less­ly shel­ter­ing in place, I’m simul­ta­ne­ous­ly scared and bored.

That’s how I feel in my weak moments, but most of the time I’m okay. I have an advan­tage. When my spir­it fal­ters, I call to mind the promise I made, and I try hard to meet the stan­dard set a cen­tu­ry ago by the Papaw who came before me. Despite all his suf­fer­ing, he was a good old guy with an easy smile, unfail­ing­ly kind and patient. I nev­er saw him angry; I nev­er heard him raise his voice; and I only saw him cry once. When he was alive, I took his good humor for grant­ed. Today, I’m inspired by it.

« King of the Road » Tough Love