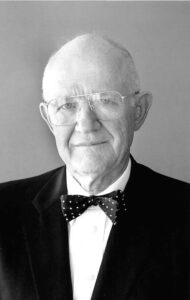 I arrived at Lath­am thir­ty years lat­er and became inter­est­ed in labor law ear­ly on, but I was reluc­tant to join the firm’s Labor Depart­ment. My one and only reser­va­tion was John Welch. By then, he was the chair­man of the depart­ment, a giant in labor law cir­cles, and the most stern, intim­i­dat­ing per­son I’d ever encoun­tered.

For a junior attor­ney, meet­ings with him were an expe­ri­ence in psy­cho­log­i­cal tor­ture. When I entered his office, he wouldn’t acknowl­edge my pres­ence in any way for at least a full minute. Even when he final­ly looked at me, he remained silent until I vol­un­teered my rea­son for dark­en­ing his door. From there on, he grilled me with ques­tions I hadn’t antic­i­pat­ed. As I stam­mered through a series of insipid answers, his cold stare reduced me to a pud­dle of water. After each meet­ing, I expect­ed the firm to fire me by the end of the day.

When my fear of John Welch was at its zenith, Lath­am decid­ed to open a Wash­ing­ton, D.C., office, and the firm’s Man­ag­ing Part­ner, Clint Steven­son, asked me to be the new office’s only labor lawyer. I was stunned, in part because I was only in my third year of prac­tic­ing law and didn’t think I had enough expe­ri­ence to do the job, but more impor­tant­ly, because I was con­vinced the Labor Depart­ment Chair­man con­sid­ered me an idiot.

“What does Mr. Welch think about this?” I asked anx­ious­ly.

Clint seemed puz­zled by the ques­tion. “We wouldn’t assign you to the posi­tion if John didn’t have full con­fi­dence in you.”

When I recov­ered from shock, my ego took over. All the big wheels in firm man­age­ment want­ed me to relo­cate to Wash­ing­ton, so I fig­ured tak­ing the job would score points with them and launch my career like a rock­et to the stars.

When John met with me, I saw a dif­fer­ent side of him. He didn’t men­tion the firm’s inter­ests. He focused sole­ly on what was best for me. “Slow down,” he said. “Think this through. Don’t get swept away by the tide.”

I didn’t heed his advice. The tide was swift; my ambi­tion blind­ed me; and I moved to Wash­ing­ton. It proved to be a ter­ri­ble mis­take. For rea­sons unre­lat­ed to me, the firm’s major east coast labor client dumped us, and my rock­et crashed and burned.

I called John and told him I want­ed to come back to LA. We met with Clint. He was deter­mined that I stay in Wash­ing­ton. We went back and forth until John said to Clint, “Ken’s return to LA is best for him, best for the Labor Depart­ment, and best for the firm. So get it done.”

Clint got it done, but when I returned to LA, I was run­ning scared. Clint wasn’t pleased with me, and Car­la Hills, the Wash­ing­ton office Man­ag­ing Part­ner, want­ed me fired. Sens­ing my state of pan­ic, John sat me down. “Calm down,” he said. “Do good work, and you’ll be fine.”

This time I lis­tened to him, and over the next sev­er­al years, John gave me guid­ance with a light touch at the crit­i­cal moments when I need­ed it most. With his help, I rebuilt my career and sur­vived.

A few years lat­er, my-five-year old son fell prey to a rare dis­ease. By the time the doc­tors diag­nosed it cor­rect­ly, his con­di­tion was crit­i­cal. I dropped every­thing at work, and my son and I moved into a children’s hos­pi­tal. John vis­it­ed us our first day there. After a game of Chutes and Lad­ders, he took me aside. “Don’t wor­ry about any­thing at the office,” he said. “We’ll cov­er your work. You stay here with your son until he gets well.” His delib­er­ate use of the word “until,” and not “if,” helped steel me for the com­ing days.

My son made a full recov­ery, thank God, and I returned to work with a dif­fer­ent mind­set. Up to that point, I’d made the bad choice of ele­vat­ing my career above my fam­i­ly. I want­ed to change my ways. When the local soc­cer league asked me to coach a team, I faced the first test of my new-found resolve. To coach, I had to com­mit to two week­day after­noon prac­tices dur­ing the sea­son. I couldn’t see how I could leave the office ear­ly and still man­age my case­load.

I men­tioned my dilem­ma to John. “You can do both,” he said.

That sim­ple sug­ges­tion worked and it changed my life. I coached my kids’ teams for a decade and spent more time with my fam­i­ly. My bal­ance between fam­i­ly and work wasn’t always per­fect from there on, but I became a bet­ter hus­band and father.

Short­ly before John’s 100th birth­day, Lath­am facil­i­tat­ed a zoom con­fer­ence call of retired part­ners who were close to him. The goal was to pro­duce a video from edit­ed excerpts of our state­ments about John. We were asked to choose a word or phrase that best describes him and to tell sto­ries about our expe­ri­ences with him. Wise, stead­fast, pro­fes­sion­al, and deter­mined were words the oth­ers chose as they spoke about his pos­i­tive impact on their lives. My phrase for John was life coach, and I told the sto­ries I’ve relat­ed here. When I came to the part about John’s vis­it­ing me and my son in the hos­pi­tal, I broke down and had to regroup before I could go on. Forty years after my son’s ill­ness, my grat­i­tude for John’s encour­age­ment and com­pas­sion dur­ing the biggest cri­sis of my life over­whelmed me dur­ing the tap­ing, and it did again as I wrote this.

John has brought to the art of liv­ing a grace, dig­ni­ty, and con­sis­ten­cy unprece­dent­ed in its qual­i­ty and longevi­ty. In my view, 100 years of John Welch isn’t enough. In August 2021, when this pan­dem­ic is over, I’m look­ing for­ward to a face-to-face cel­e­bra­tion of year 101.

Post Script:  In addi­tion to John’s prodi­gious intel­lect, he’s an amaz­ing phys­i­cal spec­i­men. When he was 63 and I was 36, he invit­ed me to run six miles with him. I’d been run­ning for a while and thought I was in good enough shape to keep pace with him. I was wrong. He ran me into the ground. “Nice easy run, Ken,” he said, slap­ping me on the back at the fin­ish line. When he was out of sight, I went behind a hedge-row and threw up.

He made back­pack­ing trips to the high Sier­ras reg­u­lar­ly into his 80’s. He climbed Mount Whit­ney five times. A heli­copter took him on 44 trips to the high­est peaks of the Cana­di­an Rock­ies and dropped him off to ski the steep slopes, and he con­tin­ued ski­ing into his late 90’s. An inter­net sports pub­li­ca­tion taped a doc­u­men­tary about his fit­ness reg­i­men when he was 95. It’s less than four min­utes long and gives you a good sense of who he is. You can see it here: https://www.facebook.com/peoplegettingfit/videos/1553166878343180.

John was the ninth attor­ney to join Lath­am & Watkins. Today, it employs 2600 attor­neys in 29 cities all over the world. He is the firm’s first and only retired part­ner to reach the age of 100.

Foot­note: The last three pho­tographs in this post appeared in a May 4, 2018, arti­cle in the Deseret News.